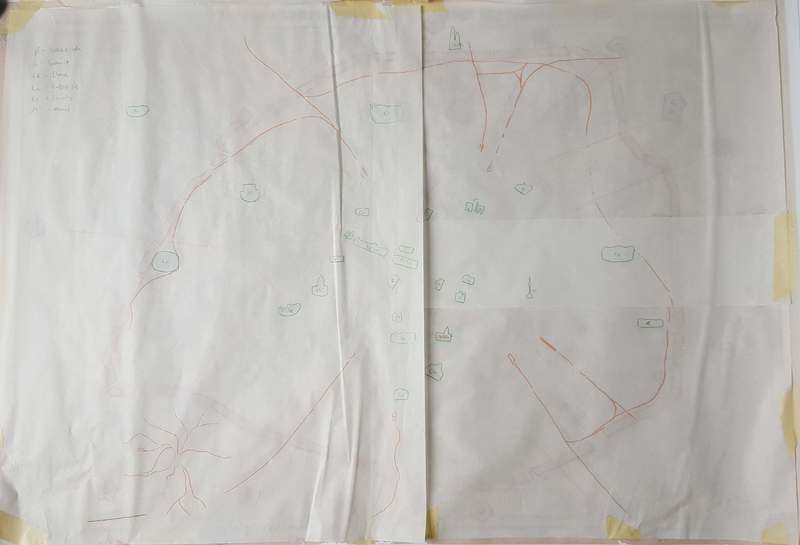 The railways are drawn on the map in thick lines, labelled by their destinations, and emphasised by side-on engravings of trains. In these ways they are placed ahead of other forms of transport: roads and canals are shown, but they do not specifically link Paris to other parts of France, and visually merge with the background of the map. In part this seems just to be an attempt to flag up an exciting technological innovation, and one that must have been very recent: the trains to not lead to names stations but to small, sparely depicted “embarcaderes,” which suggests that formal large railway stations had not yet been built—indeed each line leads to a different, single embarcadere. The depiction of the railways is comparable to that of the monuments (both break the 2D visual language of the map) and that of the forts, which also link Paris with areas not depicted on the map. Railways are highlighted in red on a small accompanying map of the surrounding area, which also shows nearby towns, fortifications, rivers and roads, none of which are marked in colour. It is interesting examining the interaction between the railways and the other layers—the lines circle Paris between the Murs d’Enceinte and Murs d’Octroi, and only enter central Paris to reach their terminuses, perhaps indicating which areas were most densely populated and had the most powerful residents.
I ran out of tracing paper so I traced these lines on the same sheets as the Monuments. They don't overlap.