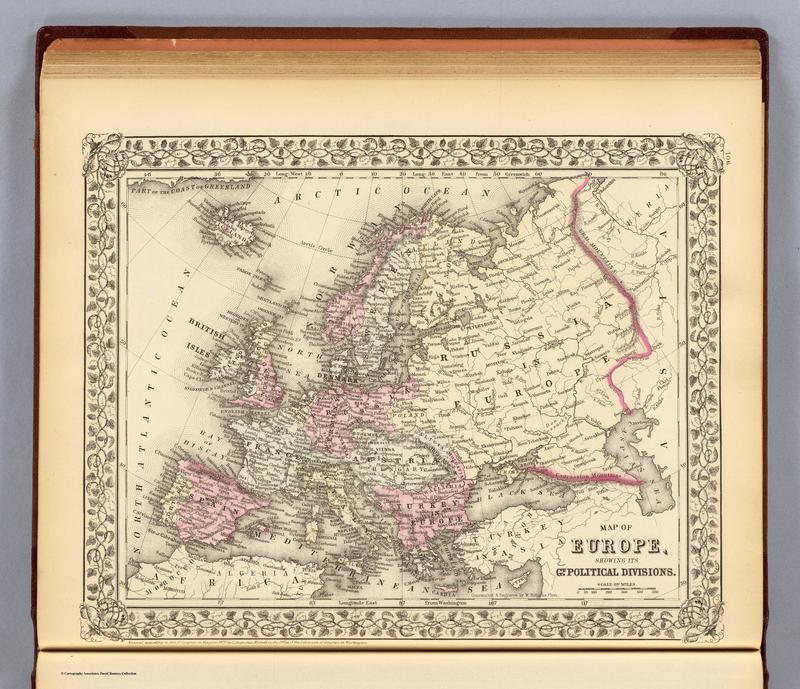 This atlas map of Europe is included as it is an excellent example of a persistent problem that cartographers of Europe faced after German unification: how to label the quasi-federal German Empire. Interestingly, the label for Prussia -- the dominant German state -- is bigger than that of Germany. While the label for Germany runs vertically through the Rhineland -- a major British tourist destination -- the Prussian label runs horizontally. One might wonder whether British tourists to Germany connected the country they visited with the rising German state, or whether they sustained a similar dichotomy between Germany and Prussia.
A possible explanation for why this map labels Germany so is that it uses plates made before German unification -- a version of the map made in 1870 has the same label, with the horizontal "Prussia" indicating Prussian territory and the vertical "Germany" indicating the smaller German states.
Pre-unification maps did distinguish between (militaristic) Prussia and the rest of Germany, and through inertia that distinction persisted long into unification, for example in these maps. It is of itself interesting that the term "Germany" was used, and given the same stylistic treatment as the name of a country, before the creation of a single German state, suggesting that British and American people thought of the German states -- excluding Prussia -- as a country, even before unification.

"Entered according to Act of Congress in the year 1879 by S. Augustus Mitchell in the Office of the Librarian of Congress in Washington," officially published in an atlas in 1880