Original map of the Transvaal or South-African Republic (Historical Map) 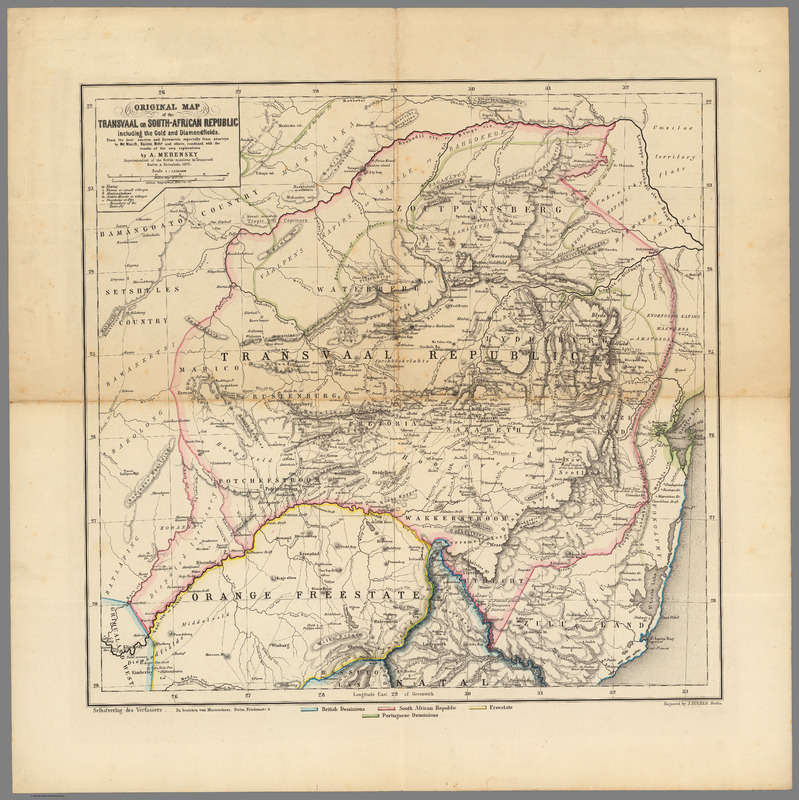 Original map of the Transvaal or South-African Republic

This map is entitled the “Original map of the Transvaal or South-African Republic” and was published in 1875. It was the first comprehensive and accurate map of the Transvaal and was published just before the outbreak of the First Boer War. The map shows the geography of the area, and highlights (quite literally, through the use of color) the political boundaries between Portuguese dominions, British dominions, the South African Republic and the Orange Free State. The feature of the map that makes it most interesting to my project, however, is the inclusion of a green line that marks the “boundary of the Tsetse fly.” The tsetse fly causes sleeping sickness, one of the diseases that posed such difficulties to the European colonial endeavor. Until you read the label, it looks like the green line marks another territorial boundary between nations; instead it gives the territory of the fly as much visual importance as that of, say, Britain. Insofar as presence of the tsetse fly and therefore increased disease transmission prevented colonial expansion, then perhaps the green line does mark a political boundary: the regions to which European colonizers could not expand. It is also an interesting way of visualizing disease, since no disease is explicitly mentioned on the map, instead it is the habitat of the vector that is noted, with the implication that everyone knew what the tsetse fly was and its effect. Disease is referenced vaguely in other labels on the map, such as “unhealthy flats”, but this is not even given a exact marker or reference to the type of disease in that area.