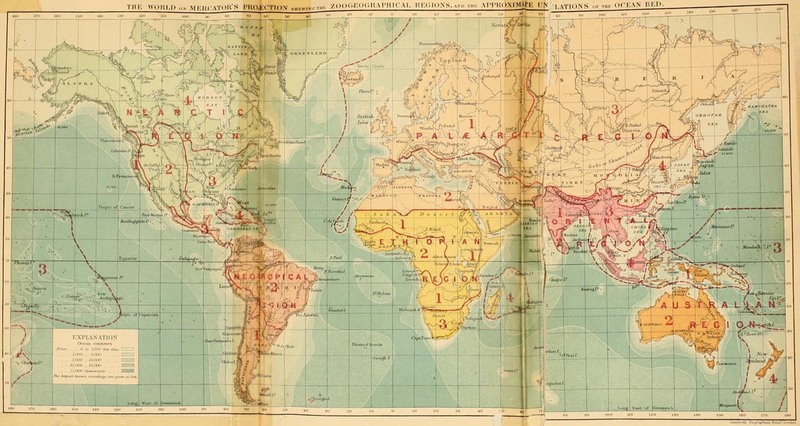 This map is the frontispiece of Wallace's book "On the Geographical Distribution of Animals. With a Study of the Relations of Living and Extinct Faunas as Elucidating the Past Changes of the Earth's Surface" (1876). This map shows the 6 regions into which Wallace believed the world could be divided based on the distinct groups of animals living in them. It also draws lines around subdivisions within those regions; Wallace established each of these subdivisions by comparing the ranges of many species and higher-level groups of animals and locating borders past which the ranges of numerous animal groups did not extend. The red lines on this map are not absolute boundaries that no taxonomic groups cross. Many cosmopolitan animal groups live in multiple of these regions, but Wallace thought constructing biogeographical regions was still important because, as the title of his book suggests, a sense of what regions share biota can help scientists figure out historical associations between different landmasses. Biogeography has serious implications for the evolution of both life and earth, and Wallace's evolutionary theories were based on his study of biogeographical ranges. Wallace was not the first to map out biogeographical regions of the world. He built off of the work of earlier natural historians and explorers who had noted distinct floras of plants on different continents and of the ornithologist Philip Lutley Sclater who, a few years earlier, had divided the world into six regions based on their passerine birds. However, Wallace, unlike any before him, focused his whole career on studying the distribution of species. This map shows the global scale of the conclusions that he was able to draw with further study building off his experience observing the details of species in the Malay Archipelago.

The geographical distribution of animals; with a study of the relations of living and extinct faunas as elucidating the past changes of the Earth's surface. Vol. 1.

This map is included in the book by Wallace, but it is unclear whether he produced it. In his text, he notes that Mr. Stanford and Mr. Bolton worked out the details of the maps. These men, the proprietor and cartographer of Stanford's map shop in London, most likely made the map for Wallace's book.