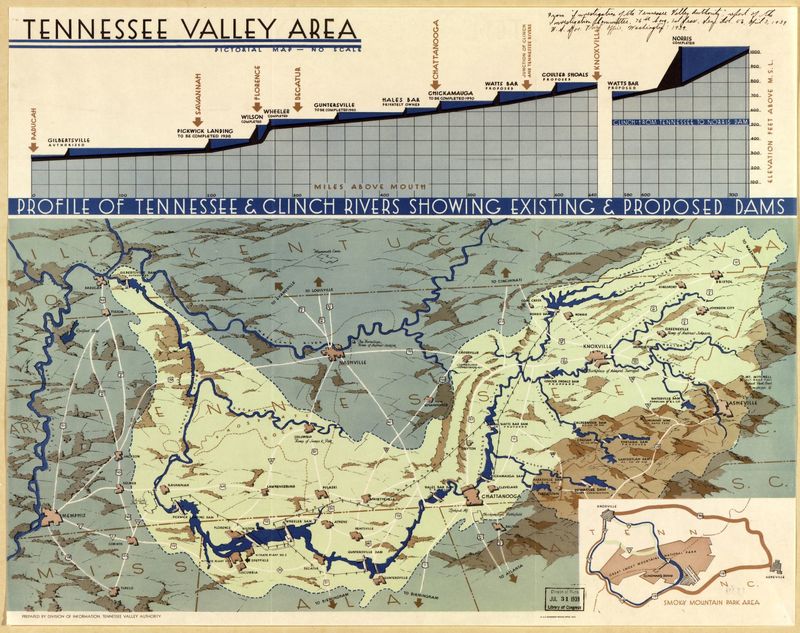 This pictorial map, produced by the Tennessee Valley Authority, shows the Tennessee River Valley region with particular emphasis on the proposed work and improvements of the TVA. As the map notes, there is "no scale," nor does it include a compass rose. The map has three major parts: the diagram of the proposed dams along the top of the image, the pictorial map of Tennessee, and an inset of Great Smoky Mountain National Park in the bottom right-hand corner. Taken together, all three parts contribute to a particular understanding of the regional geography.

The top diagram shows the location of proposed dams along the Tennessee River with respect to the distance from the mouth and the elevation. This is the product of the Tennessee Valley Authority's work in the region; it's mandate was to provide flood control and generate agricultural and industrial development in the region.

The colors of the map serve to emphasize the area under the TVA's domain, highlighting it in a light green while the rest of the land area is a muted cornflower blue. Mountains, hills, state lines, and cities are depicted in brown; roads are white and toponyms are in black. The rivers and title of the map are dark blue.

The Great Smoky Mountain inset acknowledges the growing importance of recreation and scenic tourism to the region. The National Park was newly established, and the roads linking Knoxville and Asheville, the two cities on either side of the Appalachians in this area highlight the connectivity, which should enable economic growth, of the mountainous landscape.