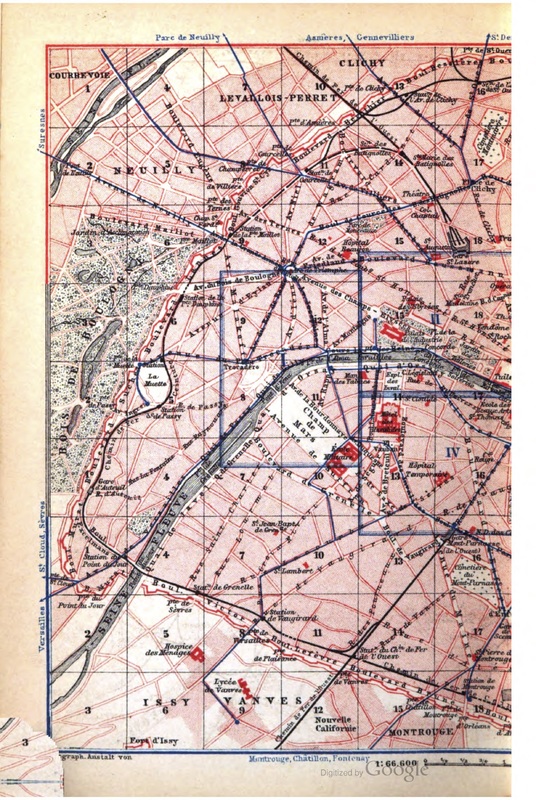 This is half of a map of Paris included in Baedeker's 1878 English-language guidebook to the Paris region. It gives us a sense of what British visitors to Paris in the late 19th and early 20th centuries would have seen -- after all, this guidebook and others like it directed them. Certain buildings are highlighted, along with railway lines, parks, rivers, neighbourhoods and major roads. Interestingly, among the buildings picked out, a large number have some government connection, such as the "Ecole Militaire," "C. [cours] Legislatif" and "Palais de l'Elysees." (There are also a lot of churches). It seems it was a convention to mark out public buildings on urban maps -- an 1883 atlas map of Paris does the same -- but whether or not the mapmaker was deliberately directing tourists to these buildings or just following a convention is not really important: the map was used as a tool, and even if tourists strenuously avoided such buildings, they would have had to use them to navigate and thus anchor their sense of location to such buildings. Thus it seems tourists in Paris would in most cases encounter the symbolically-important buildings of the French government, and perhaps they would link those government buildings to their overall impression of Paris. Perhaps they would have found the government buildings impressive or unthreatening. Even if they found the buildings sinister and exotic, their view of the institutions contained within them would be tempered by the surrounding city, which the buildings represented. After all, capital cities are often used to refer metonymically to governments.
Indeed, the streets marked out on the map constitute a catalogue of great French people (such as Montaigne) and battles (such as Wagram). The experience of visiting Paris perhaps allowed English visitors to view France's history from that country's perspective, rather than from their own, for example by seeing how victories over Britain's allies (such as at Iena, Wagram, Eylau) were commemorated in France much as British victories over France (such as Waterloo) were memorialised in British street names. Additionally, these patterns of street naming meant that British visitors may have connected these people and events with the places they visited, so the touristic appeal of Paris in some way could have defanged French history.

Included in Karl Baedeker, Paris and its Environs: With Routes from London to Paris, and from Paris to the Rhine and Switzerland, Handbook for Travellers (Leipsic [sic.]: Karl Baedeker, 1878).

Foldout map from a guidebook

City Level (though because of how it was digitized, this file is only half of a larger map of the whole of Paris)

Included in a book.

As this map was extracted from a digitized copy of a guidebook, it is not in any formal map collection.