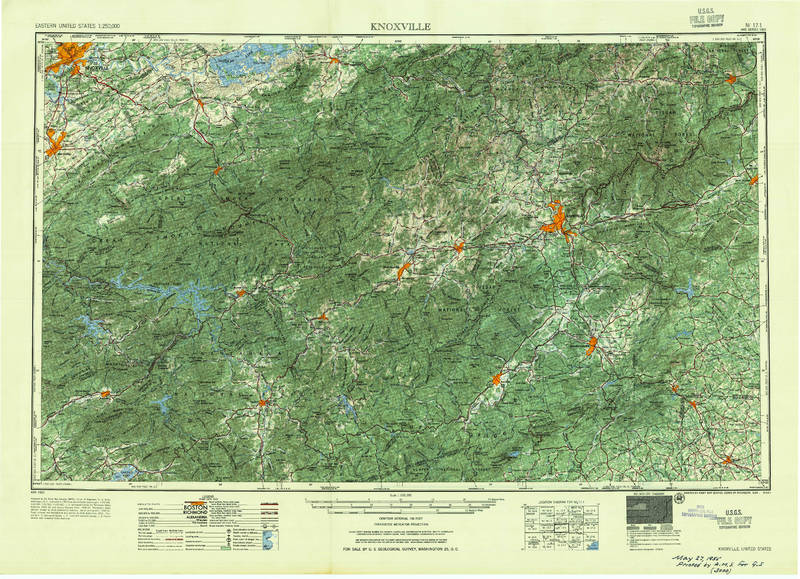 This large-scale topographic map covers the region between Knoxville, TN and Asheville, NC. As an official U.S.G.S., the map makes claims to objectively representing the landscape through topography. The consistency of representation across such a large region makes the map more difficult to read than a small-scale or pictorial map.

Great Smoky Mountain National Park is not depicted in a different color, but is labelled by text. All the cities are made the same fluorescent orange color. Roads are the same color red on both the white and green background.

Despite the consistency of representation across the entire landscape, the choices of the U.S.G.S. mapmakers still indicate a hierarchy of landscape. The "Great Smoky Mountain National Park" text is at least as large as the "Knoxville" toponym and spaced out to cover the large area which highlights the spatial importance of the mountain region. The orange color represents "populated places" according to the key, which would then imply that people only live in this landscape in named cities; the rest is untouched natural wilderness. The red roads contrast more with the white background as opposed to the green, which emphasizes the presence of road in non-forested places and tends to hide them in the green area.

The faith to the scale of the natural features places lakes over rivers in the visual hierarchy. Lakes are blue polygons, rivers are small blue lines winding among the brown contour lines. Nonetheless, the water features of significance, lakes, rivers and ponds, are all represented on the map.