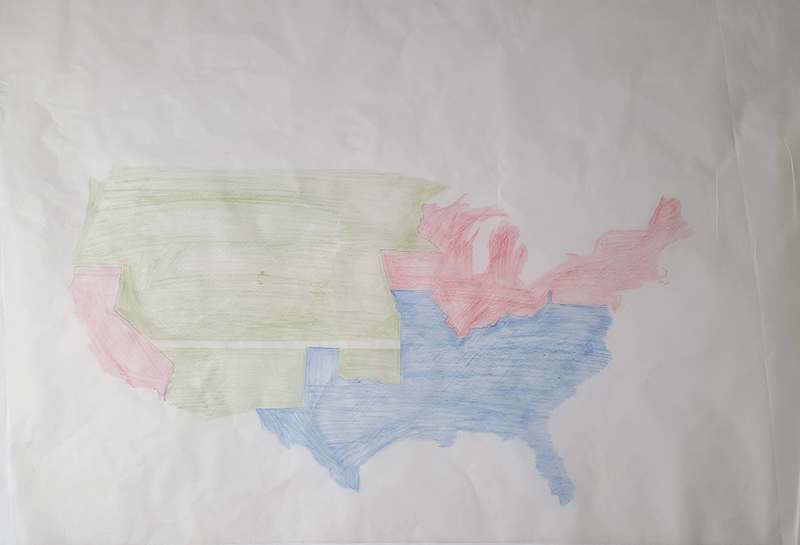 This layer contains a wash of three distinct colors: bright red for free states, dark blue-gray for slave states, and green for territories that were, as the map’s title calls it, “open to slavery or freedom by the repeal of the Missouri Compromise” of 1854. This layer encapsulates what I find to be the central object of the map as a whole, which is to use abstraction to convey a political message. The color washes appear to have been applied by a distracted artist rather than a fastidious cartographer. For instance, the colors spill over lines liberally—Long Island Sound or the loose splashes over Nantucket and Martha’s Vineyard provide good examples. There is almost the sense that the cartographer accidentally spilled buckets of paint over the map. This looseness plays into how the abstract colors represent political ideology rather than distinct geographic features. In conveying that political message, the mapmakers made distinct choices in color choice. Coloring the slave states a dark blue-gray gives the impression that the slave power is as a storm cloud that darkens and encroaches upon the innocent, natural greenness of the unclaimed territories. This dark coloring of slavery also has the effect of connoting immorality, especially in contrast to the bright, chipper cherry red of the free states. Moreover, the dark blue has the effect of making it extremely difficult to discern the natural features, like rivers, in the slave states—a fact that I learned the hard way in my tracing. I contend that this obfuscation of natural features is intentional; the mapmakers seek to prove in obscuring the rivers and mountains that slavery is unnatural and counter to the ideals of the land that the red and green colors highlight so much more clearly and favorably.