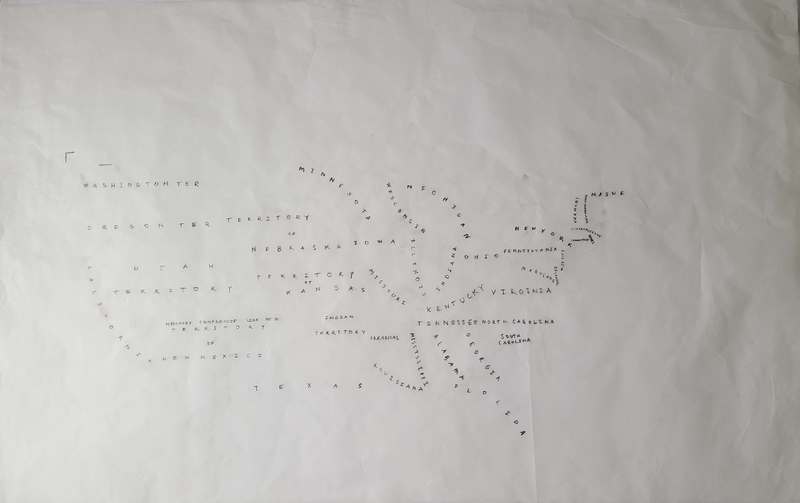 One of the things I noticed in exploring this map is that although state boundary lines are almost indiscernible, state and territory place names hold an outsize importance in the visual hierarchy. The text for state and territory names is in an imposing, block letter font and all capitals and seems unusually large and bold. This boldness creates an imposing quality that leaves obvious fingerprints of an obstreperous intervention into the natural space of rivers and colors. I argue that this mechanical, intrusive quality is an intentional attempt to show how man-made political divisions are at odds with the natural landscape of rivers. To put it broadly, I see a conflict between the natural and man-made features of the map. I see the overbearing text size and the preeminence of rivers as the two primary visual layers at the forefront of this confrontation. It seems to me that the there is a parallel between the incongruent juxtaposition of natural and man-made features in the map itself and a broader conflict that was going on in the 1850s to claim the territories as either slave or free. Indeed, the clunky visual picture created by the place name fonts stands in stark contrast to the cleanness and order of the Missouri Compromise negative space, which smoothly sleuths across the territories. I argue that this visual confrontation mirrors the map-maker’s opposition to the Kansas-Nebraska Act of 1854, especially in contrast to the order and stability that the Missouri Compromise ensured, at least according to Republicans at the time. After all, opposition to the Kansas-Nebraska Act precipitated the formation of the Republican Party, and this map was produced as a piece of pro-Republican election propaganda for the 1856 presidential election.