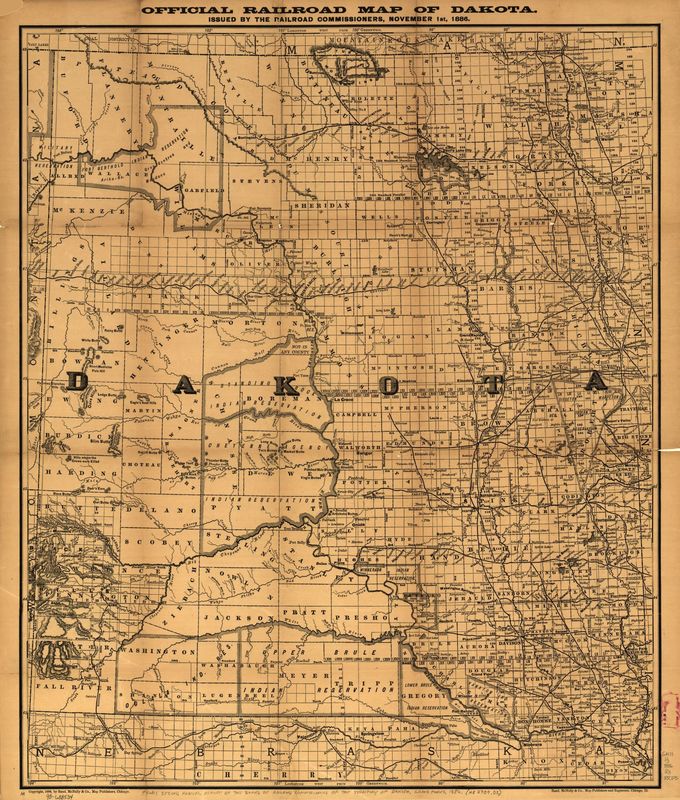 Summary (from Library of Congress): Shows relief by hachures, drainage, cities and towns, township and county boundaries, Indians, and the railroads with lines named.

My description: This 1886 Rand McNally map, created by the railroad commission, depicts the Northern Pacific railroad crossing the Dakota territory, along with counties, surveyed and parceled townships, towns, Indian reservations, and rivers. The map-makers preference human-made features, like railroads, and political divisions, like townships and counties, above natural features, of which there are very few designations aside from rivers. On the right side of the map, much more ink covers the page in the form of a township grid that covers the entire Eastern half of the territory. In the Western part of the territory, township grids cover only parts of the territory, principally along the Northern Pacific line and in the Black Hills. This lack of surveying demonstrates that in 1886, the "frontier," or the edge of American civilization, lay somewhere in the middle of the Dakota territory and that railroads were the mechanism by which civilization spread westward, at the expense, of course, of native peoples, whose reservations are indicated by shaded outlines.

The area that Theodore Roosevelt settled in from 1883 to 1886 was at the edge of this frontier and, as it was located along the Northern Pacific line, was an area that was in the process of being settled and surveyed in the 1880s. By comparing this Rand McNally map from 1886 with a U.S. Department of the Interior map from 1882, which is also in my collection, we can see how Medora and the surrounding Little Missouri River basin was surveyed and split into townships in the intervening years. Roosevelt himself commented on how quickly the land went from wild to surveyed. In his 1913 autobiography, he looks back wistfully at what he views as a romantic, virgin period in the American West: “It was still the Wild West in those days, the Far West, the West of Owen Wister's stories and Frederic Remington's drawings, the West of the Indian and the buffalo-hunter, the soldier and the cow-puncher. That land of the West has gone now, ‘gone, gone with lost Atlantis,’ gone to the isle of ghosts and of strange dead memories. It was a land of vast silent spaces, of lonely rivers, and of plains where the wild game stared at the passing horseman. It was a land of scattered ranches, of herds of long-horned cattle, and of reckless riders who unmoved looked in the eyes of life or of death" (Roosevelt, An Autobiography).

Roosevelt did not view this loss of Atlantis in all negative terms, however. In a subsequent passage, he cast the spread of American civilization in a positive, romanticized light: “It was right and necessary that this life should pass, for the safety of our country lies in its being made the country of the small home-maker. The great unfenced ranches, in the days of "free grass," necessarily represented a temporary stage in our history. The large migratory flocks of sheep, each guarded by the hired shepherds of absentee owners, were the first enemies of the cattlemen; and owing to the way they ate out the grass and destroyed all other vegetation, these roving sheep bands represented little of permanent good to the country. But the homesteaders, the permanent settlers, the men who took up each his own farm on which he lived and brought up his family, these represented from the National standpoint the most desirable of all possible users of, and dwellers on, the soil. Their advent meant the breaking up of the big ranches; and the change was a National gain, although to some of us an individual loss” (Roosevelt, An Autobiography).

Both passages from Chapter 4, "In Cowboy Land," of Roosevelt's 1913 autobiography, http://www.bartleby.com/55/4.html.

From Second Annual Report of the Board of Railroad Commissioners of the Territory of Dakota (Grand Forks, Dakota 1886) (HE2709.D2) (From Library of Congress)