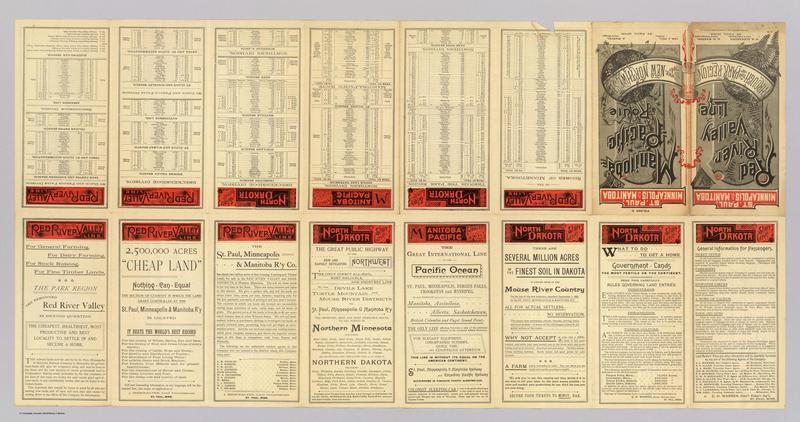 My description: This text page advertisement from the Minneapolis and Manitoba Railway provides timetables and text convincing readers to go West. The railroad company tells readers (in the lower central part of the document) that the company’s lands in North Dakota possess “Several Million Acres of the Finest Soil in Dakota” that are “all for actual settlers…no reservation.” The advertisement asks readers, “Why not accept” a farm of your own “in this great country?” Though this rail-line was not the specific rail-line that took Theodore Roosevelt to the Little Missouri Basin, it gives a clear sense of the excitement surrounding the expansion into the western parts of the Dakota territories. In particular, it captures a “get rich quick!” mentality that caused ranchers and settlers to flood into the Dakotas.

Please note: this text may not, in any traditional sense, be a map. However, the David Rumsey Collection classifies it as a "Timetable Map." Regardless of how we qualify the text, I have included it because it is a valuable resource in forming an understanding of migration and settlement of the Dakota Territory in the 1880s. Additionally, it acts as a useful supplement to the two maps in this collection that were commissioned by railway companies and made by Rand McNally, the first from 1873 and the second from 1886.

16 p. on 1 sheet. Color. Includes timetables and text on lands for sale.

Since the resource does not depict a geographic space, it is difficult to assign a geographic scope. The text concerns Minnesota and the Dakota Territory.

16 p. on 1 sheet. Color. Includes timetables and text on lands for sale.